Not of this worldFor Xavier Naidoo’s tour „Nicht von dieser Welt 2″ we were commissioned with the main stage as the center piece of the soul star’s eight-part tour.

Peter Roth-Lipkow, our responsible stage specialist on site, employed a HOAC theatre turntable with a diameter of eight meters, covered with white Macrolon, on which Naidoo and his musicians performed. In addition to the show light, a subtle and stylish LED lighting from below set the stage for the artist. Around the turntable, a concentric circular platform with an outer diameter of 14 meters was installed. It was connected to the main stage through four ramp like bridges and offered the artist the possibility to perform close to the audience all around the stage. 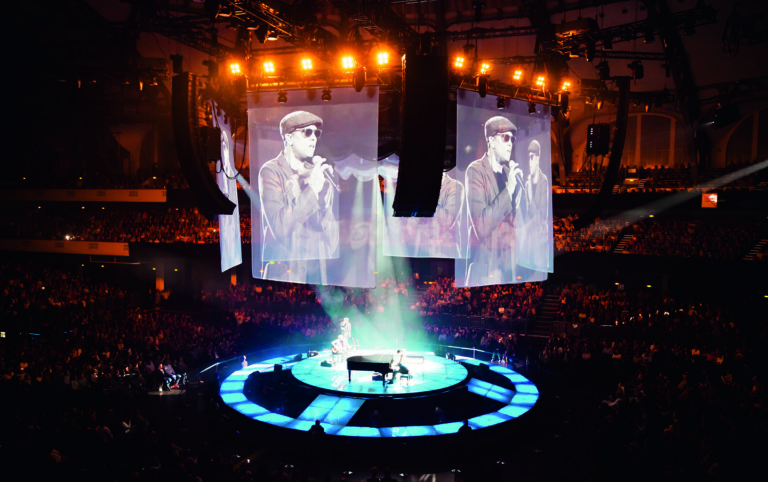 Fantastic stage designThe design concept by Gunther Hecker (Cue GmbH) included yet another highlight: Three concentric cylindrical screens were arranged above the stage. The two innermost cylinders were tableau curtains moved along point hoists, while the outermost one was realized as a roller screen.

Impressive projections were made possible using six Gerriets Tube Carbon roller screens from schoko pro’s own stock, covered with white gauze. Having them permanently mounted on a Stacking 52 truss made the tight schedule including assembly and dismantling on an almost daily basis manageable. .

During an elaborate tour, time often remains a constant challenge. To be able to coordinate all crafts in high quality while meeting all current safety standards, the entire stage was rollable.

This way, the various components could be pre-assembled in the free areas of the hall and, upon completion of all other crafts, could be pushed into the center of the hall on time for the show. For the transport of all components we decided to use Cargo Carts by Late Night Concepts. Altogether, 25 of these effective, convenient and reliable transport carts were employed. With their help, the stacking truss units were shipped completely pre-mounted and assembled on location.